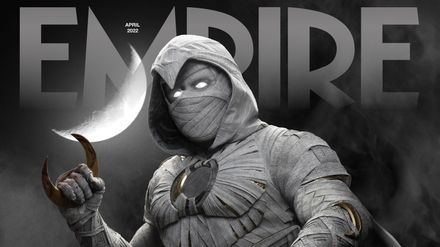 One of the big commercials during the superbowl this year was an extended look at the upcoming Marvel TV show, Moon Knight.  The superbowl spot gave us our first good look at the costume and the vigilante in action, with plenty of Oscar Isaac and Ethan Hawk playing their respective characters.

Kevin Feige recently spoke with Empire magazine about the series, and says the Oscar Isaac-led series will show the hero being physically ‘brutal’ as a fighter and will mark a tonal shift from what has previously been released on the streaming service to date:

“It’s been fun to work with Disney+ and see the boundaries shifting on what we’re able to do. There are moments [in the series] when Moon Knight is wailing on another character, and it is loud and brutal, and the knee-jerk reaction is, ‘We’re gonna pull back on this, right?’ We’re not pulling back. There’s a tonal shift. This is a different thing.”

Isaac plays Steven Grant/Marc Spector – a mercenary with dissociative identity disorder, a mental health condition in which an individual has two or more personalities with their own histories and traits. He soon becomes a conduit for Khonshu, the Egyptian moon God.

Isaac tells the outlet that the series releasing on Disney+ may be an advantage to its storytelling approach:

“He’s an obscure hero, and the things we’re dealing with are very different. But because it’s a limited series, rather than a movie, the pressure isn’t there to make sure the opening weekend is massive. We’re able to take more risks, to bring that experimental quality on a huge scale.”

Moon Knight will begin its six-episode run on Disney+ from March 30th.  Hopefully, the darker, more brutal tone of Moon Knight will pave the way for a resurgence of other dark Marvel heroes, like Daredevil and Punisher, to appear on Disney+ in the future.